‘Just The Way You Are’: Music Listening and Personality 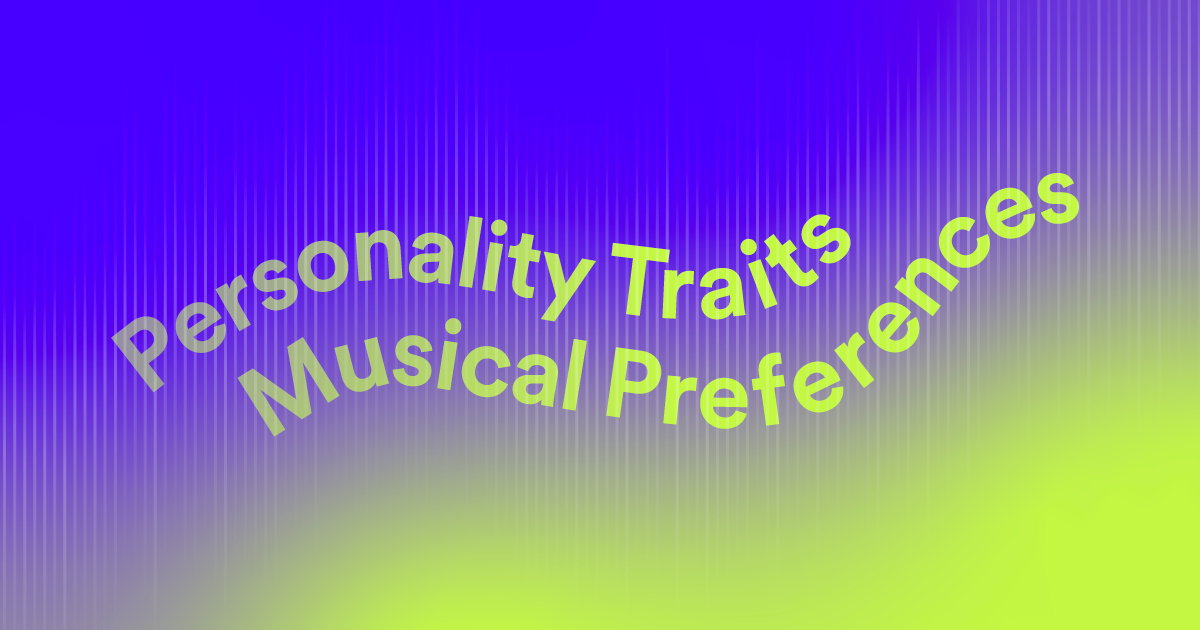 Music is such a core part of culture and everyday experience that it has long been believed to be connected to one’s personality. Music, more than any other media, has strong ties to our emotions: music communicates emotion, stirs memory, affects mood, and spurs creativity. Yet until the early 21st century, there hadn’t been much study quantifying the relationship between personality and music preferences. In fact, a recent meta-analysis seemed to cast doubt that the relationship was very strong at all [1]. However, by using more modern techniques and a broader understanding of music taste, we were able to show in a recent publication for Social Psychological and Personality Science that musical preferences can reflect the Big Five personality traits on par or better than prior big data personality studies.

Prior studies of music and personality run into limitations by rarely being able to fully measure listening habits, instead relying on self-reported preferences and small samples. We asked a number of Spotify users to opt into a study of their listening over three months, including information about the genres and moods of music that they listen to. In agreement with best practices within social science, all users could additionally opt-out of the study at any time. To get a more complete picture, we went beyond simple music taste to also look at how people listen to music: Do you discover new music or listen to old favorites? Are your tastes diverse? Do you have regular listening habits? By quantifying the answers to these questions we can build a more nuanced understanding.

Alongside these measures, study participants were asked to complete the Big Five Inventory, a 44-item questionnaire measuring the Big Five personality traits: Openness, Conscientiousness, Extraversion, Agreeableness, and Emotional Stability. To understand how these personality scores relate to music preferences, we trained a machine learning model to predict someone’s personality using only their preferences and demographic information. To gain additional insight into these models, we measured correlations between each personality trait and the suite of metrics we constructed to represent what and how someone listens to.

Our results show that not only are personality traits able to be perceived using musical preferences, these results show greater performance than previous research [2] that use reactions to musical excerpts and artist likes on social media to infer a person’s taste. Of the five personality traits we measured, music taste is best able to detect Emotional Stability and Conscientiousness. While these two traits are significantly related to age and gender [3], they also may signify a connection between the common uses of music to regulate emotion or match goal-oriented behavior.

When we look at the correlations to individual metrics, we see that mood and genre information are the strongest connections to personality traits. Those who self-assessed as more “open to new experiences” tended to listen to more Classical, Afropop, or “Sentimental” music (e.g. “Freddie Freeloader” by Miles Davis, “April Come She Will” by Simon & Garfunkel). Listening to Blues or “Brooding” music (e.g. “Take Care” by Drake, “Karma Police” by Radiohead) has an inverse relationship with self-assessing for “emotional stability,” while listening to Soul or “Lively” music (e.g. “Down On The Corner” by Creedence Clearwater Revival, “Let The Good Times Roll” by Ray Charles) correlates positively. People who listen to Death Metal or “Aggressive” music (e.g. “Boss” by Lil Pump, “Last Resort” by Papa Roach) tended to have less “agreeable” self-assessments, while people who listen to Jazz or Country had more.

These connections extend past what people listen to and also relate to how people listen to music on Spotify. People who listen more to Discover Weekly tended to identify as more “open to new experiences,” as did people with higher all-time track discovery rates. Those who scored high in Conscientiousness tended to concentrate their listening to a more narrow window of time of day than those who scored lower in that trait. People whose results identified them as extroverts tended to listen more to others’ playlists, potentially indicating more reliance on their social network’s music suggestions. Self-assessed introverts, on the other hand, tended to dig deeper into an artist’s catalog, listening to more tracks for each artist they discovered.

Although our study shows that a great deal of information about personality is communicated through musical preferences, there are some limitations that may motivate future research. Our dataset was limited to a small group of US Spotify users, which limits the generalizability especially to non-Westernized cultures and those who do not have internet-enabled devices. This is broadly true for most studies of musical preferences and habitual listening behavior, making it a critical extension. Future research should also expand our work by investigating other personality constructs like cognitive profiles or narrative identities. These avenues will continue to expand our understanding of the connection between personality and music.

That said, we recognize that one’s digital history is extraordinarily personal and sensitive. As such it must be treated with proper consideration of the conceivable misuses and unintended externalities from its access. Our research was conducted in such a framework, including a review board that scrutinized our design and methods before granting formal ethical approval. We disavow any future research or applications that violate ethical standards of data usage and are not transparent about privacy to its users.