Podcasting as a medium is growing exponentially, with hundreds of thousands of shows available in genres from comedy to news reporting to true crime storytelling to health and wellness to education and self-directed learning. With such a great variety of content, it is natural that listeners would approach a podcast catalog with some aspirational goals (such as learning a language or eating healthier), while also desiring simpler pleasures such as entertainment or having a feeling of some connection via listening. Recommender systems help listeners find content to listen to, but how can they account for the different goals listeners might have?

Recommender systems are typically trained to some target engagement signal such as clicks, streams, likes, or a weighted combination. In this work, we dive deeper into this target choice by focusing on podcast recommendations at Spotify. There are now more than one million active podcast shows consisting of 64 million episodes. Podcast shows are distributed by RSS feeds; people subscribe to a show to automatically receive each new episode. But it is also common to “dip in” and just listen to single podcast episodes. Thus podcasts offer two strong engagement signals: show subscriptions and episode plays. Certain types of subscriptions may reflect aspirational goals listeners have; in particular, subscribing to a language-learning podcast, a news podcast, or a health and wellness podcast suggests that the user has aspirations that they hope to achieve. But episode plays do not necessarily follow from show subscriptions; the recommender system, by filtering what users see first, mediates plays, and how it does so depends greatly on the choice of target engagement signal to which to train.

In this work we take advantage of this distinguishing property of the podcast domain to tackle the problem of optimizing recommendations in the presence of multiple implicit engagement signals. We explore this problem by answering three main research questions:

Our goal here is to highlight the differences observed when optimizing recommendation algorithms based on different engagement signals. We use a recommendation algorithm based on deep neural networks that has shown promising results in similar recommendation applications. The framework casts the recommendations problem as an extreme multi-class classification task modeled by a multilayer perceptron. This provides flexibility in handling heterogeneous feature sets, and the approach is widely used across recommender systems that operate in large scales.

We train this model twice:

We summarize the recommendations provided by each model by using the category of a show and aggregating top shows that are recommended across users. The distribution of recommended items in each model shows large differences between categories:

It is apparent that the choice of implicit signal has a big impact on the type of shows being recommended to users. But does this difference in category representation impact what show categories users would end up listening to? The difference in recommended list does not guarantee a difference in exposure or consumption, as users usually do not scroll through the whole list and the choice of what items to play is impacted by other factors as well that are independent from exposure.

We deployed both of these recommenders in production and in an A/B test contrasted the user consumption for each variant. Our results showed that indeed both exposure and consumption reflect similar differences:

Studying the disparity: What factors are predictors of each engagement type? 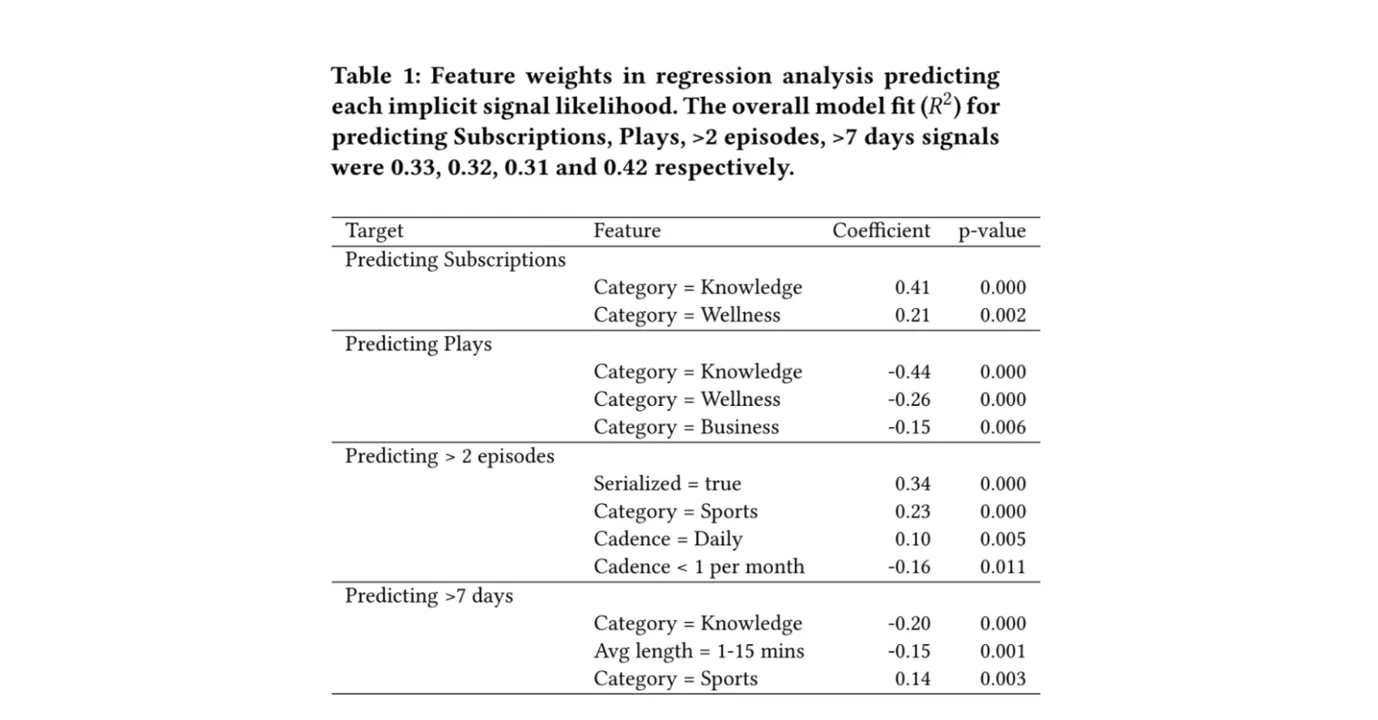 A surprising learning was that length and cadence of episode release do not play a major role in how people engage with shows. However, the content of the show as reflected in category and show theme are important factors. For example, shows with a “learning” theme are more likely to be subscribed than played, no matter the length and release cadence. Also the category of a show being Sports is a strong predictor of more engagement in the form of >7 days return to the show. This analysis provided us with a lot of insights on how users engage with different categories of shows; Particularly, users’ aspirational behavior when subscribing compared to when streaming was enlightening. Optimizing for streams can bias the recommendations towards certain podcast types, undermine users’ aspirational interests and put some show categories and creators at disadvantage.

This analysis hinted that to explain and address the observed gap between what is being recommended in each model, normalization and sampling approaches based on release cadence or episode length would not be helpful. Instead we observed that each engagement signal can inform parts of a users’ interests and goals of engaging with podcasts, and to best serve users, we need to leverage both play and subscribe signals in recommendations.

Next, we propose a simple and explainable solution rooted in calibration literature that can take into account both aspects of user behavior.

We use calibration as an approach to leverage both interaction signals in the form of plays and subscriptions to address users’ various goals in podcast consumption. We first train the recommender based on plays to create a pool of shows that a user finds engaging, and next, go through the pool and calibrate the final list to reflect users’ interests captured in the category of shows they subscribed to.
Specifically, we train a recommender using streams and create a pool of top 1000 recommendations along with their relevance score from this model. Going through the pool for each user, we create a recommendation list by optimizing for two objectives: 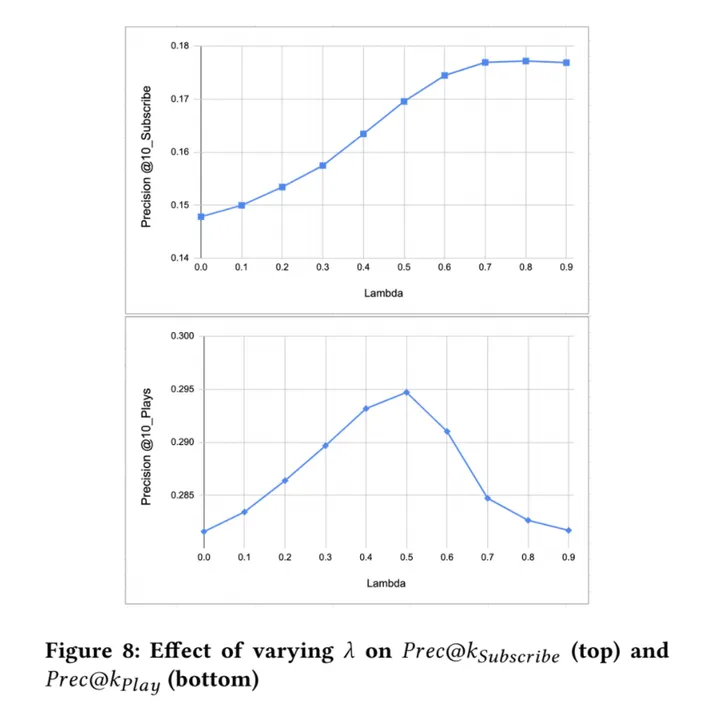 We balance the two objectives by modifying a coefficient lambda. With the proper level of calibration we end up with a recommendation list that improves the accuracy when evaluated against both subscriptions and plays. The following graph shows that using lambda = 0.5, precision@10 is improved for both plays and subscriptions in offline evaluations.

In this work, we demonstrated how a simple optimization target choice between plays and Subscriptions can have a big impact on the type of shows recommended to the users; Optimizing for streams compared to subscriptions can undermine parts of users’ interests and put some show categories at disadvantage. Finally, we proposed calibration as a simple and explainable approach to leverage both sources which resulted in a recommendation list that satisfies both targets.