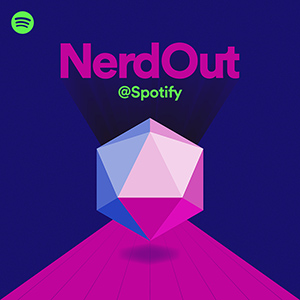 NerdOut@Spotify is a technology podcast produced by the nerds at Spotify, and made for the nerds inside all of us. Hear from Spotify engineers about challenging tech problems and get a firsthand look into what we’re doing, what we’re building, and what we’re nerding out about at Spotify every day.

A tech podcast produced by the nerds at Spotify, made for the nerds inside all of us. We’ll try to find the answer to questions big and small, like: Is it harder or easier to be a developer today? Is TypeScript lovable? Should you run your home automation on a Kubernetes cluster? Subscribe to find out.

Backstage, Spotify’s homegrown developer portal, has become the most ambitious open source project in the company’s history. But for many on the team, it was the first open source project they’d ever launched. What were the technical decisions they considered/reconsidered/forgot to consider before releasing it into the wild? And what did they learn along the way?

Open source has become an essential part of software development, for both individuals and companies. Hear from Spotify engineers about what it’s like to build products in the open, what they’ve learned from developing Backstage with hundreds of friendly, helpful Internet strangers, and how participating in a community helps you grow as an individual, too.

04: Backstage in the Wild

Spotify believes open source is one way big tech companies and the wider developer community can solve big tech problems together. So how’s that going? In this episode, you’ll hear from our friends at Netflix and American Airlines — both early adopters of Backstage, our open platform for building developer portals.

Our Audio Intelligence Lab built the world’s beefiest effects pedal using machine learning and Python. Say hello to Pedalboard, an open source framework for adding studio-quality effects to audio files — at a speed and scale well beyond the capabilities of the tools you’d normally find in a music studio.

The one and only Kelsey Hightower drops by the recording studios at Spotify’s global HQ in Stockholm to chat with host Dave Zolotusky about what it’s like being a software developer today: did it get harder or easier?

In this special bonus episode, Google’s Kelsey Hightower is back to tell us what separates a good talk from a great one, the importance of storytelling, and the pitfalls of relying too much on your demo.

Get ready: we’re diving into machine learning. Hear how we’re improving personalization with reinforcement learning (RL), what makes ML engineering so different from other kinds of software engineering, and why machine learning at Spotify is really about humans on one side of an algorithm trying to better understand the humans on the other side of it.

In technology, as in life, bad experiences often start with bad data. This is as true with a misguided aunt setting you up on a blind date as it is with machine learning recommendations about which podcast you might want to listen to next. High quality data is essential to making sure every Spotify listener has a rewarding experience made just for them. But with a half trillion events happening on the platform every day, how do you even begin to sort all that data out?

What if you could create a guitar solo just by humming it? That’s Basic Pitch, a new open source project from Spotify’s Audio Intelligence Lab. Basic Pitch is a neural network that can analyze the recording of almost any instrument (including your voice) and then transcribe the notes that it detects into MIDI, the standard file format used for musical notation. It’s like speech-to-text, except it’s turning musical performances — whatever you hum, strum, pluck, peck, or tinkle — into a digital score you can edit on your computer.

If you look at any of our open source projects, you’re bound to see the phrase “Made with 💚 at Spotify.” That’s because many open source projects start off as passion projects. But is passion enough? Now that open source code is so essential to how we all build, it’s important for us to treat that code more seriously. To be sustainable, open source can’t rely on passion alone. It needs a little tough love, too. For that, we got an OSPO — an open source program office — to help our developers (and Spotify) get the most out of their open source experience.

Instead of performing 10 big software upgrades to our infrastructure every year, what if we did 10,000 small ones, in all our repos, all at once? That’s the idea behind Fleet Management: using automation to take away some of the everyday toil of being a developer, freeing our teams to focus on more interesting problems than migrating to the next version of a low-level software dependency. But for automation at this scale to succeed, our developers would have to be willing to give up some control over their codebases. Could we really get our squad-based culture to adopt a fleet-first mindset?

Dave works in Spotify’s Platform team, where his focus has been core infrastructure, the data platform, and Spotify’s use of cloud services. A noted evangelist for cloud native and open source technologies, Dave spurred Spotify to join the CNCF and remain active in the community. Prior to his time with Spotify, Dave worked at AWS, at VMware on cloud management software, and at Microsoft on the Office team. Dave has been on the CNCF Technical Oversight Committee (TOC) as an End User representative since October 2019. He nerds out on board games and the great outdoors.